New research, reveals the top 10 spookiest places across the country, just in time for Halloween

New research by iVisa ranks the spookiest places across the country, revealing that Estes Park, Colorado is the 2nd ‘scariest’ due to The Stanley Hotel which is thought to have inspired the infamous novel by Stephen King, The Shining.

Philadelphia is the ‘scariest’ city, due to the infamous hauntings of Eastern State Penitentiary, once home to notorious prisoner Al Capone.

To create The Spookiest Destination Shortlist, iVisa scoured the internet to reveal which locations were most frequently recommended for Halloween fanatics searching for spine-chilling places to visit.

Here’s what was unveiled: 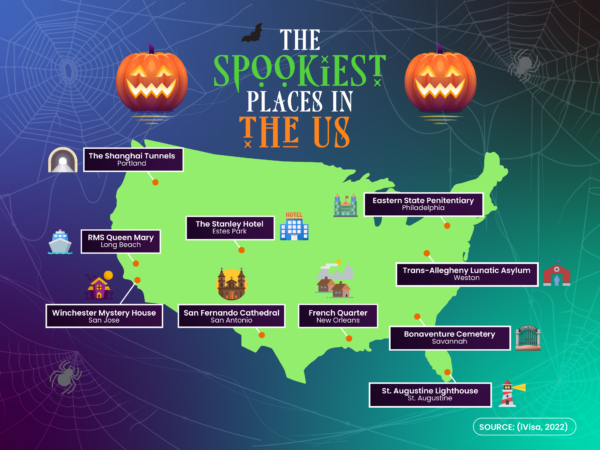 Philadelphia, Pennsylvania (1st) home to the famous Pennsylvanian jail, Eastern State Penitentiary. Where a paranormal investigation found there to be voices, shadow figures, and other occurrences that couldn’t be explained.

A hotbed of paranormal activity can be found elsewhere on The East Coast:

‘Otherworldly’ occurrences have also been recorded in the South:

As we enter the spooky season, this research acts as the perfect travel guide on where (or where not) to visit for a truly harrowing, ‘all hallows eve’ experience.

So, wherever you are in the country, why not venture away from the typical trick-or-treating and book a spooky trip? Happy Halloween!