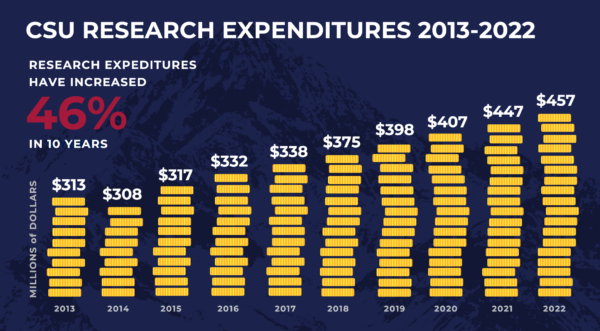 Of this past year’s expenditures, 73% was funded by U.S. government agencies. The rest comes from state and local government, non-profit groups, industry, and other universities.

“Our research training, discovery, and innovation enterprise continues to expand its reach based on our collaborative spirit and passion to make a difference in our region and our world.  I am proud of all the amazing researchers, scholars, students, faculty, and expert staff that make CSU dreams possible,” said Alan Rudolph, CSU vice president for research.

“The breadth and scale of these research achievements speak directly to the creativity, curiosity, and skill of our faculty, staff, and students,” said CSU Interim President Rick Miranda. “What’s particularly significant is the way CSU’s research is focused on solving the pressing challenges facing our state, the country, and the world.”

The College of Liberal Arts saw the largest percentage growth in funded research among all of CSU’s eight colleges, up 53.7 percent over 2020-21. The CLA departments of Political Science, English and Languages, Literatures, and Cultures saw the biggest gains over last year.

Overall, the Warner College of Natural Resources spends the most of any college in sponsored research, largely because it is home to the Center for Environmental Management of Military Lands, which accounted for $101.5 million of the college’s $145.9 million total. Second is the Walter Scott Jr., College of Engineering, at $87.2 million, followed by the College of Veterinary Medicine and Biomedical Sciences, which had $75 million in sponsored research last year.

Highlights of the year

Research highlights from 2021-22 include:

A study that measured respiratory particles produced from people singing or playing instruments, informing communities on risks in performance during the COVID pandemic. The research resulted in national news coverage by CBS News and late-night TV shows. 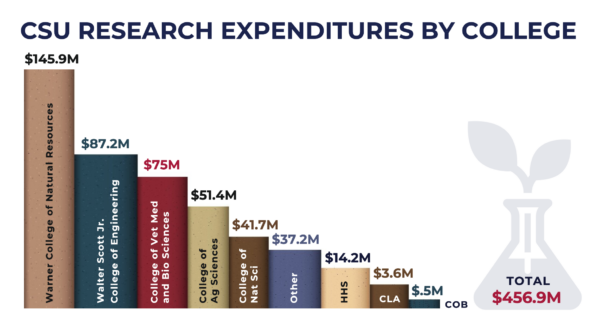 Energy. As Colorado transitions from fossil fuels to climate-friendly energy, a newly installed jumbo 3.5-megawatt industrial turbine generator at the Powerhouse Energy campus will advance research on low-carbon power generation. CSU researchers showed how improved wind forecasts save consumers $150 million in annual energy costs through better use of renewable energy. CSU is part of a consortium vying for a Western interstate hydrogen energy hub with funds from the Biden administration. And the Department of Energy is funding a program to support research to cut emissions of methane, a potent greenhouse gas.

Health. CSU researchers are part of a $12.5 million, NSF-supported institute that will advance research and education to prevent viruses transmitting from animals to humans. CSU experts developed a machine, VacciRAPTOR, that can test vaccines faster than previous systems, carving a better path toward clinical trials. The National Institutes of Health awarded $6.7 million to CSU for a new facility to study bats, known coronavirus vectors. The Columbine Health Systems Center for Healthy Aging launched the Colorado Longitudinal Study, which will create a unique biobank to predict health outcomes from 1 million Coloradans over the next 10 years.

CSU scholars continue to gain recognition for their contributions to science that serves society.

For example, Craig Partridge, chair of the Department of Computer Science, was appointed by President Biden to the President’s Committee on the National Medal of Science, which evaluates nominees for the prestigious presidential award for outstanding contributions to knowledge in the physical, biological, mathematical, engineering, social and behavioral sciences.

Rebecca Moritz, CSU’s biosafety director, was installed as president of the Association for Biosafety and Biosecurity International.

Professors Steve Simske, Susan James and V. Chandraseker were named to the National Academy of Inventors. 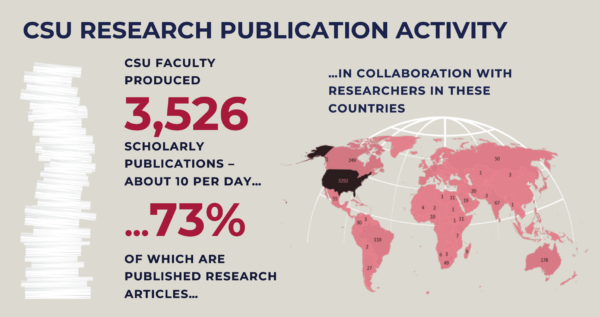 Professor Jennifer DeLuca of the Department of Biochemistry and Microbiology was named Fellow to the American Society for Cell Biology in part for her work on biomolecular underpinnings of disease, including cancer.

Professor Lorann Stallones was recognized for her outstanding contribution to agricultural health and safety research by the International Society for Agricultural Safety and Health.

And professors Edwin Chong and Tony Maciejewski of the Electrical and Computer Engineering Department were named fellows of the Asia-Pacific Artificial Intelligence Association.

Last year, 30 studies by CSU researchers were among the top 1% of most cited research in the United States, garnering 689 mentions in scientific literature, according to the Office of the Vice President for Research.