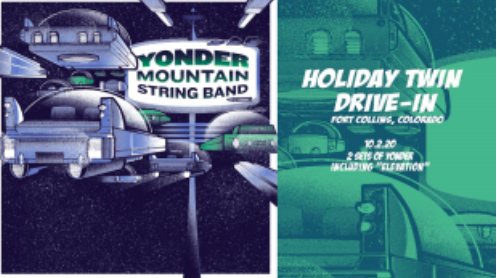 The first show on Friday, October 2 will feature two full sets by the band, including a performance of their debut album “Elevation” followed by a never-before-seen video set dating back to 2001. Entry to both of the shows will begin at 5 pm, with the performance beginning at 7 pm.

Furthermore, the second night will feature the Cosmic Bowling League followed by a live set from The Yonder Mountain String Band followed by another never-before-seen video archived from 2003. The Yonder Mountain String Band has worked to expand traditional acoustic bluegrass, pushing boundaries and infusing rock n’ roll with improvisation over the course of 20 years.

Carload passes for the shows account for four people per car with additional attendees up to two cars able to be added at $15 per person. Those attending the shows can sit in their truck beds or chairs next to their cars with all audio being transmitted through FM.

For more information and to purchase tickets, visit: https://holidaytwin.eventsmart.com/events/yonder-mountain-string-band/